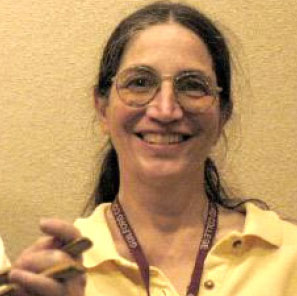 We met Sally Carroll at Bones Fest III and at that time she had played rhythm bones for about 6 month and was already a good rhythm bones player. During the first membership meeting she as a beginning player seems just right for the Board of Directors providing a perspective that none of the other, older, members had.

Sally and her husband Terry went on to host Bones Fest XIII and introduced workshops that have continued to the present.

Sally’s introduction to bones playing was at the Mystic Seaport Museum. A woman was sitting near a featured sea chantey singer doing this marvelous thing! Sally approached the woman, Alison Reilly, and was shown the bones and given a demonstration. Since it was obvious to Sally that she had to learn to do this, it was fortunate that Alison’s husband, Tim Reilly, makes real bone bones. Some weeks later her bones arrived and she began practicing, mostly with Irish, Scottish, other Celtic music, and early reggae. She plays at sea chantey singalongs.