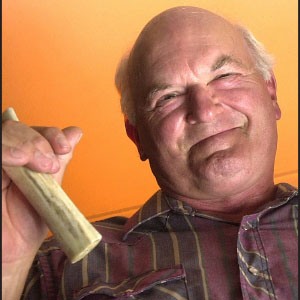 Everett “Ev” Cowett was born March 6, 1935. He was raised on a potato farm in northern Maine, an area known as “the county.” After receiving a BS degree in Agronomy from Maine he attended Rutgers University where he was awarded a PhD degree.

Ev¹s first encounter with Rhythm Bones took place during the early 1940¹s on his family’s potato farm in northern Maine. Francis and Darrell Fisher, kids about 8 -10 years old and nearest neighbors came walking into the barnyard making an unusual clicking sound. They both had two wooden sticks about 6 inches long and one-half inch wide placed one on each side of their ring finger. As they turned their wrists the sound of the sticks was captivating. Ev was hooked after less than a minute. Ev just had to learn to do that. The kids told him that their Uncle Louie had taught them the trick and that he was great with 6-inch rulers.

The sound was too much. The only tool available to Ev for bone making was a jackknife. Every farm boy carried one in his pocket in those days. Whittling seasoned hard wood proved to be difficult. Green wood was easy so Ev made many pairs of bones from green wood and let them dry for several months before he ever knew what they would sound like. Beech, birch and maple were the woods of choice.

Ev thought that the sound might be generated from the end of the moveable bone so he made many mallets to test the theory. It wasn’t until 1995, more than 50 years later, that he discovered that the sound depended upon where the tip of the movable bone struck.

Ev’s first public performance took place in 1950 at his school’s “amateur night”. He does not recall much about it except that someone tried to beat him up that night.

Many years later, Ev met Dr. Fred Edmunds, who played bones. Both believed they were the only “bones player left on the planet.” Bones Fest I was held in Greensboro, NC, in 1997 where eleven bones players attended. This first Fest was a dream-come-true for Ev. The Cowett children grew up listening to Ev play bones. Now all of them carry on this tradition. Dan Cowett