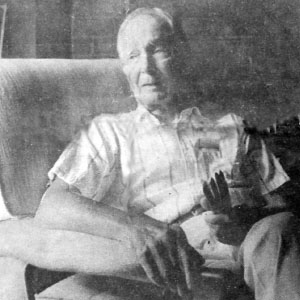 It was 1935 and Frederick T Edmunds, a 15 year old lad, was vacationing with his parents in North Carolina where he purchased his first set of wooden bones from a peddler at a church retreat.   He says they were easy to play. “Once you can hang on to them, you can play.” He must have achieved a high degree of proficiency because by the time he entered the army during WWII he played cadence during 20–mile marches while his company commander volunteered to carry his rifle.

Upon retiring to Lexington, Virginia, Dr. Edmunds, now a retired gynecologist, became interested in reviving bones playing which he had come to believe was a lost art. With his wife he created the ‘Bones Unlimited’ instruction booklet and later a video to illustrate the basics.  (these are now online on our website.)  Fred started his “Bones Unlimited” Newsletter in December 1994 and continued it until his death three years later.

Fred Edmunds was hoping for something as big as the yo-yo or Hula- Hoop—something that would create a nationwide craze, but he became happy just to pass his beloved art of playing rhythm bones to the next generation. “It would be a shame to let a musical instrument that has been around for 5,000 years fade into complete obscurity.”