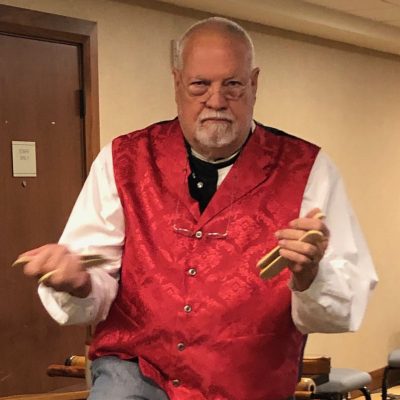 Early in my college career, one of my professors emphasized the quote, “Be a Whole Man, Not a Specialized Splinter.”  That statement struck a chord and highlighted my desire to be more than a “Jack of All Trades but a Master of None”.  Throughout life as I strove to be a bit more panurgic, I have been identified as “a Renaissance Man” but I never saw myself as that type of a polymath.  I finally discovered that I could identify as a multipotentialite ie., one who has many different interests and creative pursuits in life. Multipotentialites have no “one true calling” the way specialists do.

My Great, Great Grandfather immigrated from Erndtebruck (Aunt-te-brook), Germany in 1848 and settled in Yorktown, TX.  Even after my family had been in Texas for five generations, my first language was German.

I grew up on a small farm near Yorktown, TX and graduated from High School in 1966. My wife and I lived in Victoria, TX until 2014 when we moved to the Boerne, TX area to be near our one daughter and two granddaughters.

Professional Career:  I am currently retired after spending seven years as a YMCA professional, 18 years teaching/coaching in middle school and 25 years as a university professor training school teachers.

U.S. Naval Reserves : 21 years-retiring as a First Class Signalman–Second Class Diver with a one year active duty requirement in Vietnam.

Children And Adult Magic Shows where I have used magic as a manipulative in my science classes as well as teacher training courses.

I have sold 2 landscape oil paintings, won local awards for my “Horseshoe Nail Art” sculptures, and have sold many of those sculptures.  I am also selling my book about Isaac Hamilton, one of the Survivors of the 1836 Goliad Massacre, “Isaac Hamilton: Surviving Amidst the Texas Revolution“.

I started learning cornet in the fourth grade and played in the high school band starting in the seventh grade.  During the summer between the tenth and eleventh grade I taught myself to play tuba/sousaphone. I received a music scholarship to Victoria College and taught myself to play the bass violin which I played in the college band and then professionally during the first ten years of existence of the Victoria Symphony.

I demonstrate how fifteen or so different instruments are played (many of which I have built) at various club meetings, museums, schools, county fairs and conventions—the latest being at the Daughters of the Republic of Texas’ state convention.

I first became aware of the Rhythm Bones instrument during the summer of 1987 while working as a re-enactor as well as on the wardrobe crew on the filming of the iMax film “The Alamo: Price of Freedom”.  I saw the instrument a few months later at the Texas Folklife Festival and asked the performer about the instrument and where I could purchase it.  Following his advice, I purchased a set along with Percy Danforth’s instruction manual from Lark in the Morning and taught myself to play right handed.  One day a thought occurred to me that I might be able to play left handed and after I was able to roll out a triplet on that hand another light bulb went off where I asked myself if it was possible to play both hands at the same time?  I wondered if I and the one player on the movie set and festival were the only players in the world.  That question was answered when Steve Wixson saw my university vita online and called me to ask if I would join the Rhythm Bones Society which I did in 2005!  Currently I have hosted two bones festivals in San Antonio and serve on the society’s board of directors.

During 2008 my wife and I were enjoying an Alaskan cruise when I saw a 10” long piece of Mammoth Ivory in a tourist trap in Skagway.  Soon after arriving home, I was able to carve out the only (as far as I know) double set of the Mammoth Ivory Rhythm Bones in the world!

I currently play bones and the “One String Bass Banjo” professionally with the “Tanner Family Minstrels”.